Finding out if Marijuana Is adictive(Dependence and withdrawal) 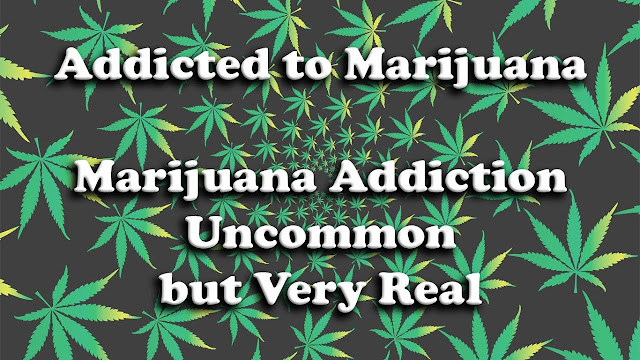 Once tolerance sets in, dependence can form. If someone uses a drug often enough, the brain will become accustomed to it.

“A person is not dependent on a drug unless they experience some kind of negative outcome upon stopping their use,” said Reiman.

“For example, if I am prescribed Vicodin for pain and I use it as directed, that does not make me dependent.

“If I try to cut down or stop my intake and have negative consequences — cravings, irritability, upset stomach, chills, etc. — that could be a sign that my use has become dependence.

“This can happen to people who take prescription medication for a long time, even if they are taking it as directed by their doctor.”

So, a drug can cause dependence but not abuse, as is the case for some people prescribed opiate pain medication. Or a drug can cause no withdrawal at all, as in the case of cocaine, but still pose a high likelihood that a person will develop an addiction when using it.

Although not nearly as extreme as heroin or alcohol withdrawal, quitting marijuana does appear to cause withdrawal symptoms in heavy, frequent users.

In a 2013 article for Salon, writer M. Welch described his first week without marijuana after about a decade of daily use as one filled with sleepless nights and irritable days.
“Then, on the fifth day, I began to calm. By the eighth day, the monkey vanished, and I haven’t seen him since,” Welch wrote.

It’s not that easy for everyone, Stalcup said.

“Withdrawal is the mirror image of what the drug does,” he explained. “If cannabis makes you mellow, then you’re irritable, grumpy.”

“For many people, that’s really unpleasant,” Stalcup added. “Especially the irritability that gets a lot of my patients into trouble. I hear, ‘Doc, I open my mouth, all this poison came flooding out of my mouth. I knew I didn’t mean it. I just couldn’t shut up.’”

A pathway to abuse
Most marijuana users don’t let their use become a problem. They’re not driving under the influence of the drug or using the drug at work. They don’t get caught with marijuana and never enter the legal system.

Some are even dependent on the drug, using it daily and going through withdrawal if they try to quit, but they still remain functional.

“But that person, they’re going to work, they’re meeting their obligations, they’re handling their responsibilities. We wouldn’t call that person an addict.”
For some people, however, marijuana use gets out of control and starts to create problems.

“Marijuana-addicted people rarely seek treatment,” said Stalcup. “So, a lot of the people we see have gotten caught up in the legal system.
“The typical example is a 16-year-old who got caught with a bong in his backpack, stoned at school.

“A lot of our marijuana referrals come through probation, parole, the courts, lawyers, and we see a fair number of those. We see people after they’ve experienced an adverse consequence.”

Hart said, “The bottom line is: ‘Do you have a problem with drugs?’

A 2014 study examined people who use drugs and who came to the emergency room with drug-related problems, which is a strong indicator that something is not manageable.
About 90 percent of the people who used drugs and their primary drug of choice wasn’t marijuana met the criteria for abuse, compared to 47 percent of primary marijuana users.

Of the marijuana users, the 47 percent who met the criteria for abuse were also more likely to smoke tobacco and binge drink than the non-abusers — potential warning signs that those people may naturally run a greater risk of substance abuse in general.

“If you are getting in trouble because you are using or going after an illegal drug, the illegality, and the fact that you don’t stop, and the fact that you keep getting in trouble over it, says that you have a high degree of a substance use disorder and that you need treatment,” said Michael Kuhar, PhD, a professor of neuropharmacology at Emory University’s School of Medicine, and author of “The Addicted Brain: Why We Abuse Drugs, Alcohol and Nicotine,” in an interview with Healthline.

“If you’re doing something that’s wreaking havoc in your life, you need help. Forget what we call it.”

The cycle of addiction
Unlike opiate misuse, which can set in fairly quickly with heavy use, marijuana misuse can take months or even years to develop. A user might not immediately realize that they’ve crossed the line into addiction.

“A part of the process for some people is to rationalize continued use despite having adverse consequences,” said Galloway.
“They may not readily admit to themselves or discuss with others what impact these drugs are having on their life. So, they get stuck in the cycle of use and adverse consequences.”

But as Galloway explains, a person with an addition isn’t making decisions the same way as a person without an addiction would.

“Part of the problem with prevention and deciding whether you should use a drug or not is that it’s hard to imagine, with one’s current brain, having a brain that isn’t making those evaluations rationally,” he said.

“You or I, presumably, can have a glass of wine in front of us and decide to pick it up or not.
“Neither of us feels a lot of compulsion — we feel a lot of choices. We’re going to weigh ‘Do I have to drive?’ ‘Do I have work in the morning?’ ‘Am I taking care of a child?’ ‘How many drinks have I already had?’

“An alcoholic doesn’t weigh things the same way. They look at the immediate benefits and immediate costs to a greater extent than they do at the long-term costs and benefits of using alcohol,” Galloway added.

“To make the diagnosis, we propose an experiment. In the experiment, we ask you for a defined period of time not to use. The basic question that we ask is, ‘OK, so you smoke pot — that’s not the issue. Can you not smoke pot?’

“Someone who’s not an addict, that’s not a problem. Being unable to not smoke it when you’re trying not to smoke it defines addiction. I encourage anyone who’s using any substance to do this experiment from time to time.”