Is Rick Simpson Oil the Cancer Cure or just a Pipe Dream?

September 13, 2019
The story of Rick Simpson and his namesake cannabis oil has made him a hero to some and a menace to others. Simpson's claim that he used the oil to cure his own skin cancer has spread online like a viral tidal wave. 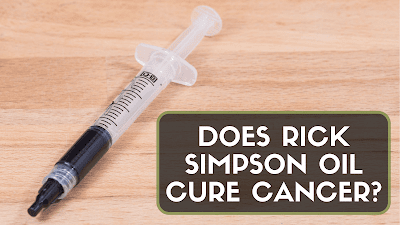 The recipe for Rick Simpson oil (RSO), which he says he has never sold, is translated in 72 languages on his website, which also carries first-person stories extolling the product's "miraculous" properties.

Doris's 20-yr-old granddaughter was diagnosed last fall with non-Hodgkin's lymphoma and went through standard chemo and radiation 'treatments'. She suffered severe burns to her esophagus and was unable to take food or fluids. We began giving her the oil about six weeks ago. Her cancer is in remission, no sign of it... You are my hero, sir!
—Testimonial on Rick Simpson's website
But clinicians familiar with Simpson and his cult-like following take a different view.

"It's terrifying," said Adam Friedman, MD, professor of dermatology at the George Washington School of Medicine & Health Sciences in Washington, DC. "This guy's gotta be stopped."

In fact, for those who believe that randomized, double-blind, placebo-controlled studies should guide evidence-based medicine, this is the kind of story that makes you want to pull your hair out.

"I have patients out there claiming on the Internet that cannabis cures cancer, but they seem to forget that they also had chemo and surgery," said oncologist Donald Abrams, MD, professor of clinical medicine at the University of California, San Francisco.

Because he is a cannabis expert, Abrams also hears frequently from people outside his practice who believe that cannabis cured their cancer. "Do we know that these were really cancers?" he asked. "Patients send me these emails all the time. Many times they never had a biopsy. Maybe they just had an infection, who knows?"

'A Healer, Not a Dealer'?
The Rick Simpson story begins back in the late 1990s in a small town in Nova Scotia, where he began growing his own marijuana plants in his backyard. He then made highly concentrated extracts from the whole plant, first to treat a head injury and later to "cure" what he says was basal cell carcinoma on his arm. Thrilled with the results, he started giving it away to ailing friends and neighbours, and teaching others how to make their own oil, which was highly psychoactive, with 90% tetrahydrocannabinol (THC).

This harmless non addictive natural medication can be used with great success, to cure or control cancer, MS, pain, diabetes, arthritis, asthma, infections, inflammations, blood pressure, depression, sleeping problems and just about any other medical issues that one can imagine, he writes on his website.

That's the kind of messaging that drew attention from the start of his journey and still resonates today. A message posted on the website states: "Due to the overwhelming amount of emails we are now receiving everyday ... we simply cannot keep up with the demands the public are now placing upon us."

My Conclusion
There is a possibility that Rick Simpsons oil plays a part in fight against cancer, some research has been done but it's not enough to warrant this oil as a cure or alternative, are we putting too much hype to the actual medicinal value of this oil, All in all the journey to finding cure starts with Hope. If Rick Simpsons Himself had not used it back in 2003, he would probably have died of cancer, it's something worth finding more about.


How to Buy or Make your own
The BEST way to get the oil is by making it yourself at home, but if you are not able to do this, you are free to order from us, but it would take anywhere from 7 to 28 Days to reach you after the payment reflects on our end, depending on your location and other factors.

Alternatively  Fill in order Form and we will contact you:- Click here As you complete the form remember to make payment for speedy delivery:-  Kindly visit Checkout Now Here or add to cart on the website.