July 18, 2018
"A preclinical study published in the Journal of Alzheimer’s Disease found that very small doses of tetrahydrocannabinol (THC), a chemical found in marijuana, can slow the production of beta-amyloid proteins, thought to be a hallmark characteristic and key contributor to the progression of Alzheimer’s."

Journal LInk:- https://content.iospress.com/articles/journal-of-alzheimers-disease/jad140093
Ricksimpsons oil is very efficient for Alzheimer´s, studies on humans will confirm it in the next decade or so. Hopefully in our lifetime.
"Could the Ancient Assyrian herb, "Ganzigun Nu" (Translated: The drug that takes away the mind) actually bring back the mind of Alzheimer's patients? Obviously, you know I believe so. Forgetting, afterall, is an important part of memory. Forgetting or pausing from thought ("spacing out") can be relaxing and stress-relieving to the overburdened mind. Also, cannabinoids in vivo promote neurogenesis in the hippocampus, the area of the brain where Alzheimer's believably originates. To further support my belief, research has shown that cannabinoids have other mechanisms to potentially prevent/treat Alzheimer's (yet further research needed).
1. Anti-cholinesterase inhibitor (ameliorates "plaque" buildup)
2. Presynaptic inhibitor of Glutamate release (anti-excitotoxic neuroprotectant)
3. Anti-oxidant (reduces free radical production and scavenges them)
4. Anti-inflammatory (turns down inflammatory signals in brain)
5. Vasodilator and anti-spasmodic (keeps nerve cells oxygenated; increases brain circulation)
"Feed your head" (No proof that smoking protects you from Alzheimer's. Promising evidence that cannabinoids are Anti-alzheimer's, but only in a rat study; THC was very effective, more so than pharmaceutical drugs in the study."

This is video covers on the last 5 points i have highlighted:- https://www.youtube.com/watch?v=jGtwil8uiII 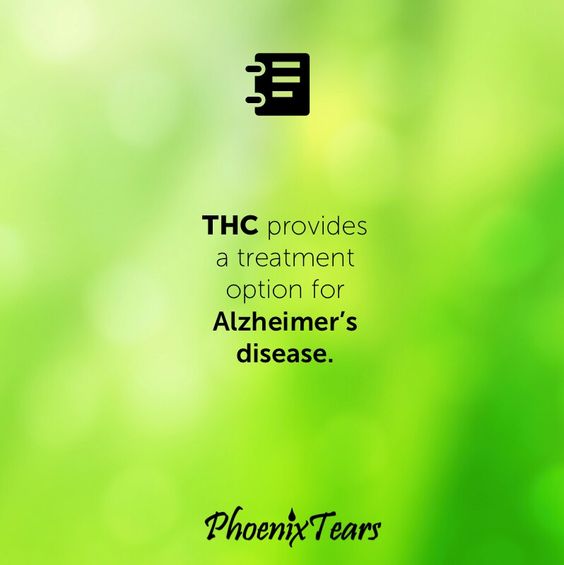 Can Marijuana Possibly Be Good For Your Brain?
Apparently, Very Possibly.

"I think all we can say safely so far is using low doses of marijuana for prolonged periods of time at some point in your life, possibly when you’re middle-aged to late middle-aged, is probably going to slow the onset or development of dementia, to the point where you’ll most likely die of old age before you get Alzheimer’s."

The above were the words of Dr. Gary Wenk, Professor of Psychology & Neuroscience & Molecular Virology, Immunology and Medical Genetics at the Ohio State University and Medical Center.

As around5.4 million people in the US suffer from Alzheimer's, it seems like cannabis,
or some of its extracts like those found in cannabis oil, are very tenable treatments for Alzheimer's patients, but better yet can serve as extremely effective preventative options. With such high numbers of sufferers from Alzheimer's, 5.2 million of which are above the age 65, there is a whole population that could be protected from developing the disease in the first place.

A 2014 study made by Byrd Alzheimer Institute neuroscientist, Dr. Chuanhai Cao, Ph.D., has found, according to Dr. Cao, that THC “directly affects Alzheimer’s pathology by decreasing amyloid beta levels, inhibiting its aggregation, and enhancing mitochondrial function.” Another study made back in 2008 found that THC:-

That obviously still remains the case.

Another related health issue regarding which cannabis is viewed as a viable option is
aging. Age is defined by some experts to be the accumulation of damage in the body. First, you need to know what "free radicals" are. They are unstable compounds that take the form of oxygen, environmental pollutants, and UV sun rays. When these free radicals enter our bodies and interact with our cells or DNA, they suck up our energy and leave us with a certain level of damage.

Marijuana, or more particularly many cannabinoids inside the marijuana, are neurologically protective antioxidants, and that means that they can serve to neutralize free radicals, preventing the occurrence of damage to our cells and DNA. In that way, marijuana can work very effectively for anti-aging therapy.

In a related context, some evidence was found on how cannabis, or extracts of it such as cannabis oil, can prevent Parkinson's disease. A review of preclinical research published by the National Library of Medicine National Institutes of Health, that cannabinoids can act as a guard against any neuro-toxicities that might contribute to the disease. Amyloid plaque, which we've established earlier while talking about Alzheimer's, that marijuana reduces, is a toxic protein accumulation which stops cells from proper communication between them. It is this plaque that over time causes the
developing of the saddening Parkinson's disease.

Today, there are pharmaceutical start-ups that are researching the use of cannabis-based drugs to prevent concussion damage. One of these is Kannalife Sciences, who is trying to put the neurologically protective properties of cannabis into a pill for athletes to take in order to alleviate or reduce the damage cause by recurrent head trauma.

"In the parlance of pharmaceutical science, we could be using that (cannabinoids) as a prophylaxis against repetitive concussive injury."

In 2014, The American Surgeon published a study stating that among brain trauma
victims, those who tested positive for THC before receiving their injuries had mortality rates lower by 80% than those who did not. To put things into perspective, we have in the US around 52,000 annual deaths caused by traumatic head injury. That means that with merely the regular use of marijuana oil, around 41,600 lives could be saved annually." Researchers reached the conclusion that THC

"protected brain cells and preserved cognitive function over time", and suggested the possibility that it can be used to serve as a deterrent to brain damage for constant protection.

Of course, it has become established by a plethora of scientific studies and anecdotal evidence, that cannabis has the ability to treat, and at high rates heal, cancer. It was found in a 2014 study that the mix of cannabinoids available in marijuana when used along with chemotherapy, can have "dramatic reductions" in the size of a brain tumor.

The curative potential of cannabis for cancer patients is not news, anyhow. 19 years ago, in 1998, a study stated that THC "induces apoptosis (cell death) in C6 glioma
cells (an aggressive form of brain cancer)". The point of strength that marijuana and marijuana oil have in relation to other tradition forms of cancer treatment, is that whereas chemotherapy or radiation therapy tend to kill cancer cells along with the healthy cells around them with no distinction, a 2009 study showed that THC was able "to kill cancer cells, while it does not affect normal cells" in the brain.

One last function of marijuana that affects brain health that we can mention, is neurogenesis. Neurogenesis is the process by which brain cells grow, specifically in the hippocampus section, which is the part of our brain responsible for emotion and memory, as well as the primary producer of neurons.

In a 2005 study, Dr. Xia Zhang at the University of Saskatchewan in Canada confirmed that cannabinoids can cause neurogenesis. "Most 'drugs of abuse' suppress neurogenesis," remarked Dr. Zhang. "Only marijuana promotes neurogenesis". Not only does this process revitalize a person's brain, but the slowdown of it can cause severe mood disorders, such as depression, anxiety, and stress, all of which are related to a lack of sufficient rates of neurogenesis. The process of neurogenesis is usually slowed down due to stress and aging. That is the reason why marijuana is one of the most effective remedies to such mood disorders, and also a strong anti-aging therapeutic substance.

Despite what we have heard all our lives about how hazardous marijuana was to our
brains, the evidence that has been emerging for the past decade strongly supports the use of marijuana or cannabis oil (Rick Simpson oil) as a catalyst to brain cell growth and a deterrent to fatal brain diseases and disorders.